This review was produced for the elective M.A. course: Shakespeare on Stage and Screen. For more information click here

William Shakespeare’s Hamlet is by far the most read, studied, translated, adapted for the stage and influential play worldwide and specifically in Bulgaria. The contemporary Sofia theatre repertoire includes two quiet similar and at the same time strikingly different in their approach, style and final impact versions of “Hamlet”. Yavor Gurdev and Ivan Dobchev, the Ivan Vazov National Theatre and the Theatre Laboratory Sfumato have given the public two opportunities to remember and think again about Hamlet’s dilemma. 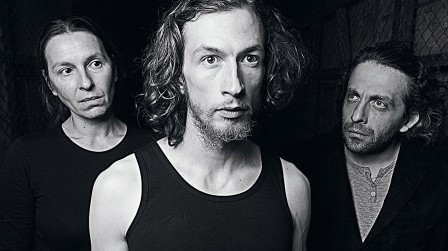 Yavor Gurdev decided to use everything at his disposal in order to create a whole new unexpected and unprecedented “Hamlet”. The director has the habit of confounding the audience’s expectations for stage space (only the ceiling was left unvisited by the performers.)The look of the production was wholly in contrast to the traditional (in a way slightly old-fashioned and grand big) main stage of the National Theatre in Sofia. The revealed set was a massive metal construction, which was used to both astonish and frighten the audience with its sheer size and powerful mechanic movement. A slightly more conventional aspect of the production were the bar-like spectator’s chairs used by the actors on two or three occasions. The sound of the production consisted of loud, ominous, fatalistic, atmosphere typical of a disco club, music arrangements and somewhat more lyrical popular songs of Adele, Lana DelRey and others, sung karaoke-style by Hamlet (Leonid Yovchev) and Ophelia (Vessela Babinova). The lighting alternately took center stage or became peripheral. The costumes were an attempt to portrait the Hamlet of today and were rather irritating in their design and colour, especially Hamlet’s purple boots. The pace of the production was slow-moving at times and rapid at others. There was an intermission of about fifteen or twenty minutes, which prolonged the production and seemed both needed and excessive. Particular unease was created by Leonid Yovchev’s wildly energetic Hamlet splashing in a purposefully designed artificial pool of water on the stage – entirely naked – supposedly madly in love with Ophelia and unable to express his joy in a more subtle way. The anachronistic shooting and use of pistols was to put it mildly, plainly out of space. The staging of the “Mousetrap” – simple, traditional and effective when executed by Shakespeare’s instructions in the play was transformed into something pretentious and very much incomprehensible, willing to impress at any cost. It feels audacious in form, but uninspired in message and content. Yavor Gurdev’s interpretation was certainly striving to be original, perhaps even unique. He stopped at nothing to convey his message and view of “Hamlet” as a postmodernist’s dream project. The text of his “Hamlet” contained almost none of the lines between Hamlet and Ophelia (and was quite eclectic in the chosen version and style of the slightly archaic translation, especially when spoken by Polonius (Valentin Ganev). The reaction of the audience differed seriously – from applauses (one of Claudius’/ Marius Kurkinski’s monologues) to whispering or more clearly expressed disapproval and even boredom. The use of space and movement was in accordance with everything else in the production – chaotic, sporadic, unmotivated by logic or anything else, at times tiresome, aiming to shock or impress by all means, but to no avail. The casting can be divided in two groups – young actors with significant potential and established, popular actors, in a way even typecasts. The most curious but to an extent inspired choice was that of Leonid Yovchev as the titular hero. He tried very hard to balance the different aspects of the role – the tragic, romantic, ironic, eccentric, the physical challenges (the choreography and acrobatic aspects of the duel with Laertes). His only “sin” and “tragic guilt” is that he is better suited to comedy parts and certainly not those by Shakespeare or by any other classical author. Yovchev is not heroic or romantic or a good speaker like the young Laurence Olivier, John Gielgud and Kenneth Branagh. Yovchev is irredeemably, way too psychologically and physically unsuited (it is sad to say but incompetent and without proper training in using his faculties to a positive effect because of his lack of restraint and psychological motivation) to ever be a believable Hamlet. Despite those shortcomings he shows some promise. Which cannot be said of the virtually nonexistent Ophelia presented rather tiredly and without depth, feeling, thought, will or desire for whatever interpretation by Vessela Babinova. Instead the gifted young actress Gergana Arnaudova was wasted as the bodyguard, servant and plain scarecrow Reynalda.Shakespeare’s Reynaldo is a very believable combination of a faithful servant and an effective and obedient spy for Polonius. The always interesting and original Elena Telbis as the ghost of Hamlet’s father was more convincing than Konstantin Stanchev, although clearly directed to act as a puppet on a string. By far the most dominating presence was Christo Petkov as Laertes. Through the force of his personality, discipline and talent he not only stays in the memory and overshadows most of the cast, but creates the lasting impression that somehow Shakespeare have wrongfully named his play “Hamlet” and put the importance on him. He should have rewritten it completely to be focused on Laertes. Because he is the most complete and at the end principled, inspired, noble and motivated of them all. In the given circumstances Marius Kurkinski as Claudius and Valentin Ganev as Polonius have replaced Hamlet as the chief hero, despite the fact that they are antiheroes, with their characteristic and most welcome, larger than life personas and artistic abilities. They are more themselves in real life or the sum of their previous parts on the stage or screen, but never less than believable and acceptable in their either cold, impassionate, dictatorial or ridiculous and overbearing, even to family and associates, images. The most unfortunate in this version of “Hamlet” is Gertrude, played by the highly motivated, daring and complex Svetlana Yancheva as a highly strung creature, always in the middle of a nervous breakdown, in the position of a hunted animal, in a perpetual condition of inability to face the situation and to decide whose side she is on. It is a tragedy and a missed opportunity for all the talented people – Valentin Ganev, Marius Kurkinski and Christo Petkov in particular because of the showiness of Yavor Gurdev’s direction in this mostly flawed version of “Hamlet”. It is a triumph of form over content and of the director over Shakespeare. 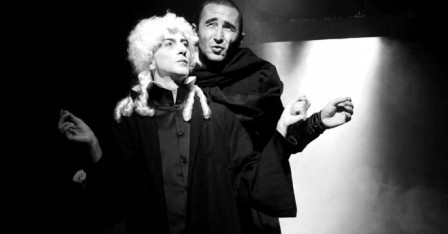 Wittenberg Revisited, an appropriation of Hamlet by Georgi Tenev and Ivan Dobchev under the direction of Ivan Dobchev creates not so much as a follow-up to “Hamlet” but a possible “what might have been” of “what dreams may come”. The scenic and dramatic possibilities at the Theatre Laboratory Sfumato are more fully realized, not only in the highly atmospheric use of smoke, water, lighting, shadows, fire, music, but also in the strong direction and assured performances of the whole cast. Sharing the set designer Daniela Oleg Lyahova and the actor Christo Petkov (here in the double role of Rhein / the Ghost of Wittenberg) with Yavor Gurdev’s “Hamlet”, “Wittenberg” chooses appropriately another less straightforward, but more intriguing and satisfying path. Denmark is a prison, a nightmare, the only possible escape in the midst of chaos, murder, warfare, abuse of power is in the memories of the past. The Chorus (Penko Gospodinov), who could be both himself and the resurrected or miraculously escaped and survived Hamlet, is a probable and sympathetic variation on the character, who is determined and at the same time stopped to act by the cavalcade of events or strange, seemingly unexplainable occurrences in the supposedly by the majority of citizens now peaceful and content Denmark under Fortinbras. The implicit oppression and secrecy and Rhein’s discontentment are part of the negative present situation, which is a suitable backdrop for the morbid romantic and fantastic atmosphere. A pair of shoes and a sentimental remembrance of the Gravedigger (Yordan Bikov) lead to a highly spiritual and at the same time carnal encounter between Chorus and Ophelia (a most psychologically detailed, precise and appealing performance by Elena Dimitrova). The actors’ transitions between body and soul, spirit and physical reality and the imagination of the theatergoer, who easily becomes willing to submit to this revisionist’ take on the mythology surrounding Hamlet – it is so persuasive, seductive and fully realized. Where does “Wittenberg Revisited” succeed where Yavor Gurdev’s “Hamlet” failed? In it we have a welcome tragicomic relief in the person of the Englishman (Malin Krustev). He is a caricature of England and its mad and eccentric inhabitants and their very progressive for the time ways to live and die. There are two versions of the helpful friend /supporter/sidekick: Marcelus (Antonio Dimitrievski) and Berndt (Yavor Baharov) present. It is a tribute to the working atmosphere and way of acting at Sfumato, that the play begins as is usual there with the actors at their places on the stage, ready to start, which helps the pace and everything runs accordingly until the moment when it decides to stop or to rest. As if Chorus, Ophelia and the others were only ghosts or part of the imagination of the theatregoers. “Wittenberg Revisited” is a beautiful illusion based on “Hamlet”, but really powerful on its own. In it through the letters and reconstructions of the interrupted by the intrigues of the court story of Hamlet and Ophelia is given a continuation of sorts.In Shakespeare’s version there is the romanticized and nostalgic version of their past memories of love and the bitterness and lack of trust in their present state of relations. It does not really matter whether Chorus is the real Hamlet or Hamlet is only a spoiled prince and not especially accomplished heir to the throne (as some reviewers suggest). Identity, life and death, reality and fantasy in “Wittenberg” are more or less substitutes. The level of controversy and speculation of “Wittenberg Revisited” is quite low (except for the most conservative viewers, who were appalled at the “taken liberties”). Hamlet and Wittenberg Revisited are fighting for the same audience, for the critics’ attention and approval, for support of the style of creating theatre in Bulgaria (elitist of Sfumato, more egalitarian at the National Theatre, willing to please the masses, more or less in accordance with the belief of Vazov that “the audience is always right.”)

Neither Hamlet, nor Wittenberg Revisited is a guide of how to understand the play, much less a trusted source how to pass a test or exam at school. According to the taste and understanding of the viewer, one or the other or both could be valid criteria for the degree of success of contemporary adaptations for the stage of a Shakespearean tragedy.