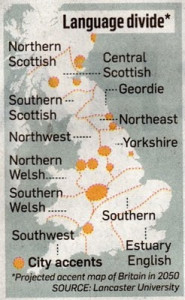 The aim of the course is to introduce students to some of the main varieties of English spoken around the world today. It draws students’ attention to those (mainly pronunciation) features which distinguish a northerner from a southerner in England, a Scot from an Irishman, an American from a Canadian, or an Australian from a New Zealander. After looking at how and why accents differ from one another, the two “standard” English accents – Received Pronunciation (RP) and General American (GA) – are compared and contrasted. We go on to discuss the changes which have affected RP in the last hundred years, look at accent variation in England, Scotland, Ireland and Wales, before analyzing Eastern and Southern varieties of American English, as well as the major southern hemisphere accents – Australian, New Zealand, and South African English.

Throughout the course, students work with a variety of audio and video materials and analyze recordings both in class and as part of their individual assignments. Click on the links below to listen to some audio samples:

Assessment is based on a course portfolio (25%), a mid-term test (25%) and a term project consisting of a written paper and a class presentation (50%).